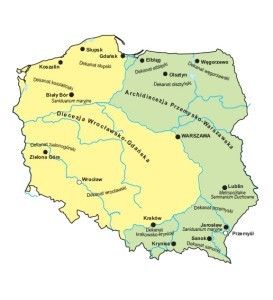 There is little information about the Diocese of Przemysl in the first years of its existence. Historians argue over the period when it was established, opinions vary from 10th to 12th century. However, it is probable that the Diocese existed in the second half of the 11th century (as mentioned in the Nestor’s Chronicle).

The first bishop, ordained by the Metropolitan of Kyiv in 1218, was Antoni Dobryna.

In the 17th century Przemysl bishops began using the title: Bishop of Przemysl, Sambor and Sanok. There has never been the Diocese of Sanok, but during Bp. Antoni Winnicki’s office they built the second bishop residence there.

In 1596 at the Synod of Brest, most of the bishops, who administered dioceses in Poland, signed the act of union with Rome thus accepting the Pope’s jurisdiction. The act guaranteed that they could maintain the Eastern Rite, preserve their own church hierarchy and canon law. Interestingly, the bishop of the Diocese of Przemysl at that time, Michal Kopystynski, did not accept the Union of Brest. The subsequent period could be dubbed as diarchy in the Diocese because the Uniates (Greek Catholics) nominated their own bishop – Atanazy Krupecki. Such state lasted until 1691 when Bp. Innocenty Winnicki accepted the Union and gained complete power in the Diocese of Przemysl. The adjacent Diocese of Lviv signed the Union in 1700.

After the first partitioning of Poland, the Greek Catholic Church was forced to implement Church reforms of Empress Maria Theresa and Joseph II. They introduced some organizational, legal and administrative changes in the Diocese as well as altered its borders.

In the Second Republic of Poland period, the Greek Catholic Diocese of Przemysl was part of the Metropolis of Lviv – Halych. The total area of the Diocese was about 40 000 square kilometres including Warsaw and Cracow parishes which were outside the Diocese’s borders. According to 1934 schematism, there were 54 deaneries with 759 parishes and 813 lay priests. There were 1359 churches (759 parish churches and 600 filial ones) and 51 monasteries and convents. In the Przemysl Seminary studied 145 students. In 1934 the number of faithful in the Greek Catholic Diocese of Przemysl was 1 244 191.

In 1934 on the territory of the Diocese of Przemysl was created the Apostolic Administration of Lemkivschyna. That new administrative entity was formed from 9 deaneries, 111 parishes and 128 000 faithful. Nevertheless, in 1938 the number of faithful in the Diocese was 1 159 380 and prior to the Second World War, together with the Apostolic Administration of Lemkivschyna, 1 320 000. The Diocese developed many organizations, associations, schools, dormitories, orphanages and Catholic publishing houses. The Greek Catholic Church owned a lot of property such as:  buildings, farming fields, gardens, woods and chattels.

The Diocese, in its collection, possessed plenty of valuable manuscripts, vellum documents, incunables, old prints and others. They also kept, in the diocesan library or the bishop residence, art masterpieces like icons, paintings and other valuable items e.g., the Moldavian cross from the 16th century, stoles given by Bogdan Chmielnicki or the legendary mitre of Przemysl bishops, the so-called King Daniel’s crown. All of these objects were gathered throughout the 1000-year history of the Diocese. Unfortunately, most of them were stolen or lost between 1939 and 1947.

After September 17th 1939, the bulk of the territory of the Diocese was incorporated into the Soviet Union. In October 1939, the Communist government decided to confiscate demesnes, ban teaching of religious education at schools, dissolve Catholic organisations and censor Catholic books. They started mass deportations of Greek  Catholics. Many Greek Catholic priests were arrested.

At that time,  the communists planned to liquidate the Greek Catholic Church and unite it with the Orthodox Church, which was completely subordinate to the government. This plan came into fruition at the 1946 Lviv pseudo-sobor. Importantly, no Greek Catholic bishop, despite threats, blackmailing and pressure, took part in this event. What is more, almost all of them died martyrs e.g., blessed Bp. Josafat Kocylowski and his suffragan blessed Bp. Hryhorij Lakota (both arrested on 25th June 1946).

Also the government of the People’s Republic of Poland started a campaign of terror to liquidate the Greek Catholic Church once and for all.

The end of the Second World War and new borders changed the Diocese of Przemysl significantly. The Apostolic Administration of Lemkivschyna (140 000 faithful) and the western part of the Diocese, with 23 deaneries, 246 parishes, 420 churches and 31 chapels, remained within the People’s Republic of Poland. The  number of faithful is estimated at  417 006 and the number of priests at 270. In 1944 the Polish government and the Soviet Union signed an agreement to repatriate Ukrainians, Belarussians, Russians and Ruthenians. Consequently, by the end of 1946 they resettled about 480 000 people to the Soviet Union, 70 – 80 thousand of whom were Lemkos.

Among the resettled were both the faithful and the priests. In consequence, many parishes disappeared or were left without proper pastoral care.

Primate August Hlond appealed to the Holy See to ask about the legal state of the Greek Cathlic Church in Poland. Pope Pius XII conferred on Abp. August Hlond and Abp. Adam Sapieha special rights which allowed Greek Catholic priests to serve in the Latin rite. Moreover, the Holy Father obligated both bishops to make it possible for Greek Catholics to receive sacraments in their rite. Soon, on 10th December 1946, Primate Hlond was nominated as special delegate for all Eastern rites in Poland.

On 9th January 1947 at Polish Episcopal Conference they decided to erect a special commission for Eastern Rite. On 31st March 1947 the Primate nominated Rev. Wasyl Hrynyk as the Vicar General of the Greek Catholic Diocese of Przemysl. Two years later, they nominated Rev .Andrij Zlupko as the Vicar General of the Apostolic Administration of Lemkivschyna. Due to declining health, Rev. Zlupko appointed two aids; Rev. Petro Szuflat (Malastow poviat) and Rev. Wolodymyr Hajdukiewicz (Krzywa poviat). Unfortunately, because of the Vistula Operation, Rev. Zlupko worked on his position only  for two months and then trusted Rev. Szuflat with his duties. Prior to the Vistula Operation, the Ukrainians suffered forcible resettlements to the Soviet Union. It is estimated that among them were 300 Greek Catholic priests. The next stage was the infamous Vistula Operation which was supposed to “solve” the problem of Ukrainians in Poland. Between 28th April 1947 and 28th July 1947 some 140 575 Ukrainian and mixed Polish and Ukrainian families were resettled (100 thousand Greek Catholics) to the North and West of Poland. Among them were 62 priests – 31 from the Diocese of Przemysl, 20 from the Lemkivschyna and 11, who after the Second World War remained on the territory of the PRP, from other dioceses of the Metropolis of Lviv. The remaining 7 Greek Catholic priests were arrested and moved to the USSR (i.a. Greek Catholic priests from Przemysl: Fr. Roman Justyn – hegumen of the Basilian Fathers monastery in Przemysl, Rev. Stefan Jaworski, Rev. Julian Miahki and Rev. Wolodymyr Prokopow) and 22 were sent to the Central Labour Camp in Jaworzno. The same wave of repression hit Greek Catholic orders.

In the so-called Retrieved Territory, where Ukrainians were resettled to, priests who avoided repression and arrests tried to provide pastoral care in their rite.

The Communist government in Poland wanted to wipe out the Greek Catholic Church in Poland completely and in order to reach this goal they decided to use the privileged Orthodox Church. The Metropolitan of the “new” Orthodox Church became Makarij Oksijuk, a very active participant of the 1946 pseudo-sobor in Lviv. He apologized to the Patriarch of Moscow for the 1924 schism. Consequently, the Polish government encouraged spreading of Orthodox parishes among Greek Catholic communities. In 1952, the Politbiuro of the Polish United Workers’ Party announced that Orthodox priests “should have full support of the government in providing pastoral care and erecting parishes for the Orthodox faithful.” What is more, they decided “to fight against the Greek Catholic faith as it is organized by the nationalistic guerrilla agents.” As a result, Orthodox parishes were erected even in places where there were no Orthodox faithful.

The government expected that each parish erection would be preceded by a written consent from the Religion Office (a government department which dealt with religious matters in PRP).

Rev. W. Hrynyk decided to omit the red tape and, even without the Roman Catholic hierarchy’s agreement, started creating parishes to provide adequate pastoral care for dispersed Greek Catholics. Thanks to his incredible effort, he managed to establish 68 Greek Catholic outposts and pastoral centres.

In 1964 the Holy See nominated the Primate Card. Stefan Wyszynski a delegate and ordinary for Greek Catholics and Armenian Catholics in Poland. The Primate appointed Rev. W. Hrynyk as is Vicar General. In 1969 Rev. Hrynyk returned to Przemysl and took the office of the pastor of the cathedral parish. He was a very devoted priest and served well both as a pastor and Vicar General. Rev. Hrynyk died on 31st May 1977. His successor on the position of Vicar General was Rev. Stefan Dziubina. He held his office until Abp. Wyszynski’s death. The new Primate Abp. Jozef Glemp on 22nd December 1981 nominated two Vicar Generals, namely Fr. Jozafat Romanyk OSBM from Warsaw for the northwestern Poland and Rev. Canon Jan Martyniak, pastor of Legnica parish, for the southeastern Poland.

The North Vicarate was divided into two deaneries: the Koszalin Deanery and the Olsztyn Deanery. It encompassed 43 pastoral points established at Roman Catholic parishes, 18 of which had separate locations. Pastoral work was provided by 22 priests. The South Vicarate was also divided into two deaneries: the Przemysl Deanery and the Wroclaw Deanery. There were 39 pastoral points, 11 of which had separate churches. There worked 24 priests.

In 1989, the Greek Catholic Church (Byzantine – Ukrainian) received, for the first time since the arrest of Bp. Kocylowski, its bishop. Rev. Mitred Jan Martyniak was ordained as a bishop on 16th October 1989. At first, he was appointed as Primate’s suffragan and the Vicar General for all Greek Catholics in Poland. On 16th January 1991, the Holy Father John Paul II nominated Bp. Martyniak as the bishop of the Diocese of Przemysl. From that moment, the Greek Catholic Church in Poland started recovery. The bishop had to re-establish offices, institutions and network of parishes. The task seemed to be more difficult because in the 90s the Greek Catholics were dispersed around the whole country.

The Holy See wanted to make the pastoral work in the Greek Catholic Church easier and decided to create the Greek Catholic Church province, namely the Metropolis of Przemysl – Warsaw on 31st May 1996. The newly-established administrative unit incorporated the Archdiocese of Przemysl – Warsaw and the Diocese of Wroclaw – Gdansk. Abp. Jan Martyniak was nominated as the Metropolitan bishop and Bp. Teodor Majkowicz as the bishop of the Diocese of Wroclaw – Gdansk. After Bp. Teodor Majkowicz’s death, Rev. Mitred Piotr Kryk, who was Vicar General, managed the Diocese. On 19th June 1999, Rev. Wlodzimierz Juszczak was ordained as the new diocesan bishop.

Undoubtedly, decisions of the Holy See resulted not only in the revival of the Greek Catholic Church in Poland but also strengthened the re-established structures thus making the Church adequate to react to the challenges of the modern day.