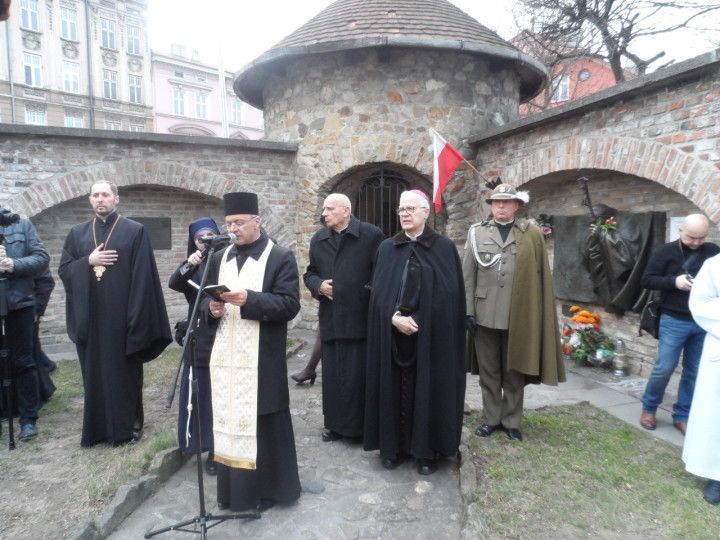 Abp Eugeniusz Popowicz, together with the local Roman Catholic bishop – Most Rev. Jozef Michalik and an Armenian Catholic priest, took part in a memorial prayer of Poles who were murdered by Ukrainian nationalists in Huta Pieniacka and Korostiatyn.
The Mass was held in the Holy Trinity Church in Przemysl, Poland.
Rev. Tadeusz Isakowicz – Zaleski, the Armenian Catholic priest, in his sermon, quoted Blessed Hryhori Homyszyn, a Greek Catholic bishop, who once said that any kind of nationalism is a heresy.
Most Rev. Eugeniusz Popowicz expressed that murders in Huta Pieniacka and Korostiatyn were a disgrace. He then said that the Przemysl area is full of both Polish and Ukrainian graves from the WW2 period and both nations still feel the pain of their ancestors but we must follow the words of St. John Paul II who once said that we should reject the hatred and rather concentrate on building a better tomorrow for all. He mentioned that the Sunday before Lent in Greek Catholic tradition is also the Sunday of Forgiving thus he asked for forgiveness for what had happened 75 years ago. Finally, he expressed a strong belief that the memory about the victims will last but will be altered thanks to forgiveness and love which have the power of changing the world.
After the Mass, the present gathered by the Huta Pieniacka and Korostiatyn murders memorial for a final prayer in memory of the victims and mutual forgiveness.