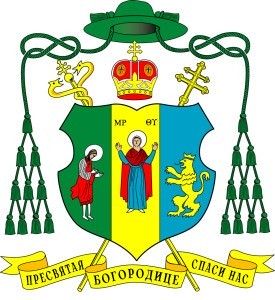 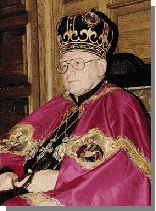 Archbishop Emeritus of the Archdiocese of Przemysl-Warsaw

Episcopal Motto: Most Holy Mother of God, save us

Ordination to the Holy Priesthood: 29th June 1964 in Wroclaw, Poland

On the 16th January 1991 nominated as the Bishop of Przemysl

On the 7th November 2015 resigned from the position of the Archbishop and Metropolitan of Przemysl-Warsaw.

Pope Francis accepted his decision and appointed Most Rev. Eugeniusz Popowicz as the new Archbishop and Metropolitan of Przemysl-Warsaw.

JAN (JOAN) MARTYNIAK – the Archbishop Emeritus of the Archdiocese of Przemysl-Warsaw of the Greek-Catholic Church in Poland.

He was born on the 20th June 1939 in Spas near Stary Sambor, Poland. His parents, Wasyl and Maria nee Zygmunt, were farmers. Jan was baptised and confirmed on 24th June 1939 at the Greek Catholic church in Terszow. His early religious life was mostly shaped by the well-known Basilian Fathers’ monastery of St. Onuphrius in the nearby Lawrow. Jan’s father was conscripted into the Red Army and died in a prisoner camp near Dresden. In 1946 the future Metropolitan, along with his mother and brothers, were resettled to Nowy Waliszow, Bystrzyca Poviat, Lower Siliesia. In 1954 he graduated from primary school and subsequently in 1958 from secondary school (High School in Bystrzyca).

After graduating, he began studying Theology at the Higher Seminary in Wroclaw. Jan graduated in 1964 and was ordained as a priest by Most Rev. Boleslaw Kominek. His pastoral work started from a position of a vicar at the Roman Catholic parish of Guardian Angels in Walbrzych in 1964. A year after he received an opportunity to pursue his studies in Rome, unfortunately the Communist government refused to give him a passport. Under such circumstances he decided to apply for Apologetics at the Catholic Theology Academy in Warsaw. Subsequently, he studied at Primate’s Institute of Inner Life. From 1969 to 1970 he worked as a junior lecturer at the Higher Seminary in Wroclaw and in 1973 at the Catholic Theology Academy, Gorzow branch.

In 1974, Rev. Jan Martyniak took pastoral care over the Greek Catholic community in Legnica and shortly became a dean. On the 22nd December 1981, Polish Primate His Eminence Jozef Glemp appointed him as the Vicar General of Greek Catolics in southern Poland.

His Holiness St. John Paul II on the 20th July 1989 nominated Rev. Martyniak as the Titular Bishop of Vardimissana and the Auxiliary Bishop of the Polish Primate, who at the time served as the Ordinary for all Eastern Churches on Poland. Most Rev. Jan Martyniak was consecrated on the 16 September 1989 in Jasna Gora and on the 16 September 1991 appointed, by the Hole See, as the Ordinary of the Diocese of Przemysl of the Greek Catholic Church in Poland (restored after 45 years).

On the 31st May 1996, His Holiness the Pope nominated him as the Archbishop and Metropolitan of the newly-established Greek Catholic Metropolis of Przemysl-Warsaw. The inauguration took place on the 17th August 1996 at the Archcathedral of St. John the Baptist in Przemysl, Poland.

On the 7th July 2015 the Holy Father accepted Most Rev. Jan Martyniak’s resignation from the position of the Archbishop and Metropolitan of Przemysl-Warsaw.