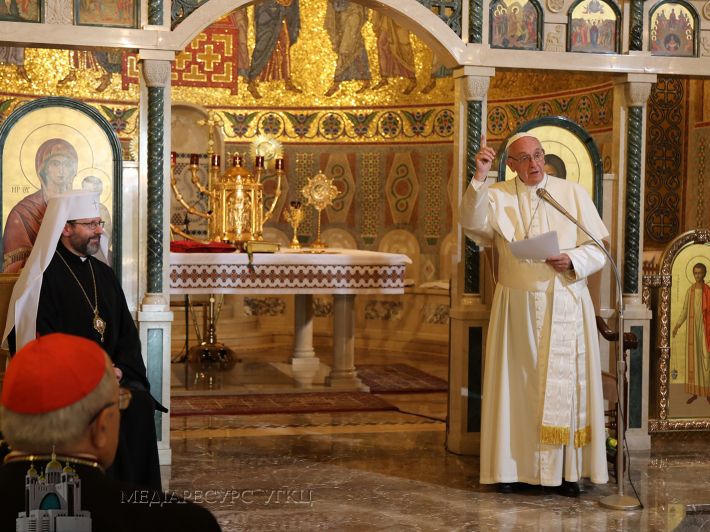 His Holiness Pope Francis, on the 28th January 2018, visited the parish community of St. Sophia in Rome at the invivation of His Beatitude Sviatoslav, the Father and Head of the Ukrainian Greek Catholic Church. Pope addressed the faithful, mostly Ukrainian migrants, by telling them „[..] a secret. Before I [the Pope] go to bed at night or get up in the morning, I meet with Ukrainians… Your Beatitude Sviatoslav presented me in Argentina with an icon of Most Holy Mother of God. I took it with me to Rome. He returned to his country from Argentina, and I had to go to Rome… I pray each time before this icon in the morning and evening and finish my prayer in Ukrainian”.
In his address, Pope Francis mentioned people „who are not with us today, but who became the image of God’s loving gazeturned upon us”. The first personality is „Cardinal Josyph Slipyj, whose 125-th anniversary you have celebrated. He built this lit with light
basilica, so it became a bright prophetic symbol of freedom in the times, when you didn’t have access to any shrines. But thanks to the sufferings, endured and sacrificed to the Lord, he partook in the building of another temple, even more magnificent and beautiful – temple from living stones, which you are”.
The second person, recalled by the Pope, is the Bishop Chmil’. He was buried in St. Sophia 40 years ago. His Holiness said that „this man did a lot of good things to me [the Pope]. I have a vivid memory of the time when as a young boy I helped him during the Divine Liturgy. From him I learned about the beauty of your Liturgy, from his stories Pope Francis in the Ukrainian Cathedral of St Sophia: I learned about the living testimony of faith, forged in the horrible persecutions of the past century. I am very grateful to him and your numerous heroes of faith — those, who, like Jesus, fell like seeds on the way of sorrows, yielding an abundant harvest. For a true Christian victory — is a sign of the Cross, our banner of hope”.
Finally, Pope Francis talked about Cardinal Lubomyr Husar. „You, dear Beatitude, are bearing his personality in your heart, and many other people will always remember his kindness, tirelessness, and prayerful presence”.
Also, the Pope mentioned the role of many women who serve as apostles of faith. He said: „you are a valuable gift because you are the best witnesses of faith for many Italian families, when by means of caring and non-intrusive presence look after people. I ask you to view your tiresome and not always grateful work as a mission: you are support for many elderly people, you are sisters, who help them not to feel lonely. Reveal God’s solace and tenderness to those who are getting ready to meet with Him in eternity. This is a great ministry to our neighbor, pleasant to God, for which I am grateful to you”.
At the end, Pope Francis thanked „on behalf of the whole Church and” assured about his blessing and concluding he asked the faithful to pray for him.