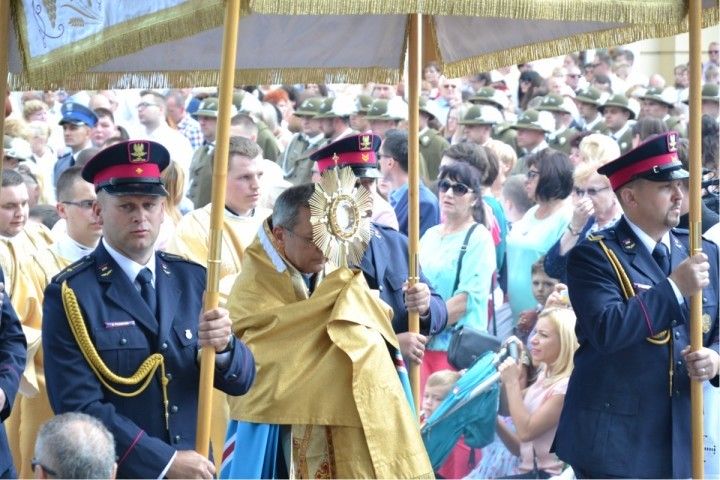 The official municipal celebrations of Corpus Christi in Przemysl commenced with a Mass celebrated by Abp. Adam Szal, the Metropolitan of Przemysl in Roman Catholic Cathedral in Przemysl. The Mass was co-celebrated by Abp. Eugeniusz Popowicz, the Metropolitan of Przemysl – Warsaw of the Greek Catholic Church in Poland; Abp Jozef Michalik; Bp. Stanislaw Jamrozek, Rev. Mitred Bogdan Stepan – the Vicar General of the Greek Catholic Church in Poland and plenty of other priests from Przemysl.
After the eucharist, the faithful formed a traditional procession and, holding the Holy Sacrament, went through the city’s streets stopping at each of four previously prepared stations. The first station was at St. John the Baptist Greek Catholic Cathedral in Przemysl. Christ was welcomed by beautiful songs performed by the Greek Catholic Cathedral’s choir. Moreover, a Greek Catholic priest read a fragment of Gospel according to St. Matthew in Ukrainian.
Abp. Adam Szal gave a sermon at the second station and blessed the faithful with the Holy Sacrament at the last one.